The Ancient City of Duliang

Let modernity be white for tradition; one will never forget the color on these walls.

With more than 2,200 years of fortification history, the Wugang City Wall protects a long history of Chinese civilization, cultural relics, and historic sites including the concentrated pattern and layout of the ancient city itself. The wall, constructed purely of stone, has a circumference of 5,874 meters and surrounds an urban area of 1.84 square kilometers. As a state-level ancient city wall of full megalithic structure, it is considered "the only one in China and the world."

Regarded by the Wugang people as an economic advantage, the Wugang Municipal Government has invested more than 45 million yuan to protect and restore the miracles of these ancient civilizations. As part of protecting the ancient city, the municipal government also has a plan and policy in place to develop the outstanding area of Wugang which includes Duliang Wangcheng and Zishui Nan'an; the three districts jointly form the Wugang urban development pattern. The plan also envisions Wugang as the cultural capital of the region, combining tours of the ancient city, Yunshan natural ecology and the Shengli Temple to provide a complete experience of history, religion, entertainment, culture, and food.

Connected by only two gates, the new Duliang Wangcheng district is located on the west side of the ancient city. The district core is composed of the community sales center and gallery, a commercial street corridor supported by higher density housing, and an internal pedestrian commercial plaza anchored by a performing arts center. Inheriting traditional Chinese architectural building forms and massing, the core buildings of the new district are reinterpreted with modern building geometries and aesthetics. Maintaining the architectural history and essence of the ancient city, the new district will feel like an extension of the city with the next generation of buildings.

Chinese classical culture and principles that guide the use of space and flow of energy, are also ingrained in the placement and position of the new district’s core buildings. Traditional Chinese characters, cultural symbology and other spiritual beliefs, guide the design and spirit of a ceremonial landscape and a place of good fortune. 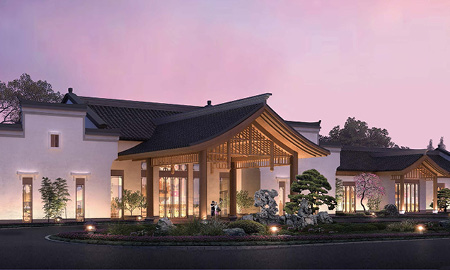